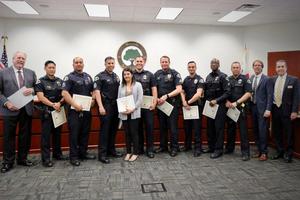 At the June 6th Board meeting, the Magnolia School District Board of Trustees recognized Mrs. Marisol Molina and eight Police Officers and three Police Sergeants from the Anaheim Police Department for their heroism. Anaheim Police Chief Jorge Cisneros and Captain Joe Reiss were in attendance.

On May 9th, 2019, a Magnolia School District student was approached and pursued by an adult male, who attempted to grab her as she walked to school.  Thanks to the student’s quick thinking, she was able to run inside a local 7-11 store. The cashier immediately came to the child’s rescue, shielding her from the suspect while yelling at the man to leave the store.  Eight Police Officers and three Police Sergeants from the Anaheim Police Department arrived at the scene and within minutes apprehended the man. Thanks to the bravery of the cashier and the members of the Anaheim Police Department, the student was safe and unharmed.